There is no rest for the wicked (Me or Colbey. Both of us. No rest).

So...what do you think everyone in the back is "saying" to Sarrah? :P

Trying to get a handle on life. Next comic...maybe Friday.

Earth in a Pocket: Anthropologist-turned-astronaut Halisi Mwangiâs lifelong mission is to bring the past to the stars. One unexpected malfunction later, however, and Halisi is space-shipwrecked on a strange alien world. As she struggles to survive and find a way back home, she finds herself with a new mission: to teach the local alien denizens about humanity, armed with only the contents of her pockets.

Faction:In the game of MUlate, players are sorted into Factions and must fight for domination. Emma Martina â a well known sponsored player â has played MUlate since it first launched, but with her Faction on the brink of elimination and mounting pressure from her sponsors, she begins to wonder how long she has before sheâs out of a job.

Temerity: Taeru is a very serious genetically enhanced super-soldier. Naia is a less serious sugar-addicted mercenary. Together theyâre the best work-for-hire duo in the galaxy. In an intergalactic world of mechas, brain hacking, and terrible pun t-shirts, Taeru and Naia spend their days performing daring missions for their clients and fighting their own personal demons. Now theyâre embarking on the most dangerous mission yet: taking down the organization that created Taeruâand attempting to keep their partnership strictly professional.

Gifts of Wandering Ice: âGifts of wandering iceâ is a sci-fi comic about ancient things people find in melting icebergs. These things, the âice giftsâ, can be anything from frozen ancient trash to valuable technology and even living creatures. Studying ice gifts is dangerous but itâs the only way to restore the forgotten history of humanity.

470 pages displayed at two comic strips per page, in a single, hardcover, Omnibus for $65 + shipping until March 2023. If you live outside of the US, please contact me first for a shipping quote: warofwinds@gmail.com 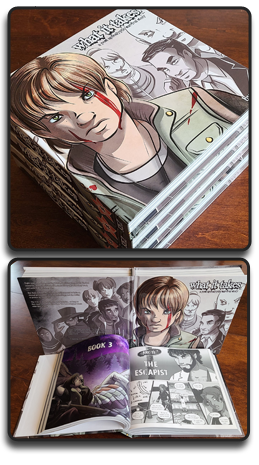